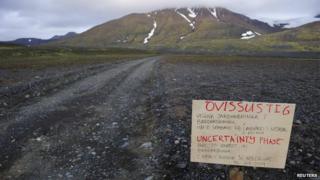 Iceland has issued a red alert to airlines after more activity was detected near a volcano there.

Experts there are warning that earth tremors underneath the country's largest glacier, the Vattnajokull, mean there's a chance of a volcanic eruption.

If that happens, it could throw out a giant cloud of ash into the sky which might mean planes across Europe aren't allowed to fly.

So far though, no flights have been cancelled and officials are keeping an eye on things.

Hundreds of thousands of passengers were stranded in airports for several days as planes were not allowed to fly across much of Europe.