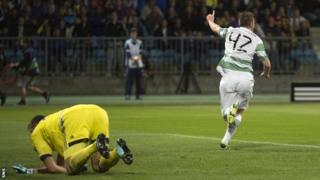 Celtic have drawn 1-1 with Maribor in the Champions League play-off first leg in Slovenia.

Callum McGregor put Celtic ahead early on, with his third goal during Celtic's qualification matches.

Maribor's Damjan Bohar quickly evened things up with a goal to equalise.

Both sides had further chances to score again but Celtic are now favourites to go through.

Celtic had been reinstated to the competition after the team they had previously lost to, Legia Warsaw, were found to have fielded a player who shouldn't have been playing.