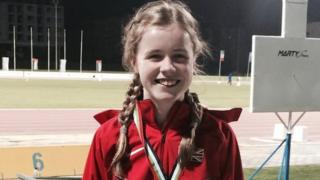 Teenager Maria Lyle has won gold in the T35 100m at the IPC Athletics European Championships in Swansea.

"I can't believe it but I have been working really hard and I'm so glad it has paid off," she told BBC Sport.

It's the first year that Maria, who has cerebral palsy, has been able to run in international competition.