Ramsey sent off in Arsenal draw 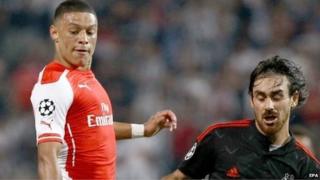 Aaron Ramsey was sent off, after receiving two yellow cards, as Arsenal fought out a goalless draw away at Turkish side Besiktas in the first leg of their Champions League play-off tie.

Ex-Chelsea striker Demba Ba gave the Gunners a scare when he hit the bar from the halfway line from kick-off.

Alex Oxlade-Chamberlain saw his shot in the 88th minute turned on to the post.

Besiktas will now travel to the Emirates Stadium in north London on 27 August for the second leg.

The winner will go through to the group stages of the Champions League tournament.