More elephants in Africa are being killed each year than are being born, according to a study.

Researchers believe that since 2010 an average of nearly 35,000 elephants have been killed in Africa every year.

Elephants are being killed by poachers who want their tusks. They contain a material called ivory which is used to make ornaments in parts of Asia.

The researchers warn that if this continues to happen, the animals could be wiped out in 100 years.

The report is published in the Proceedings of the National Academy of Sciences.

Selling ivory between countries was made illegal in 1989.

The illegal trade in elephant tusks has soared in recent years, and a kilogram of ivory is now worth thousands of dollars. 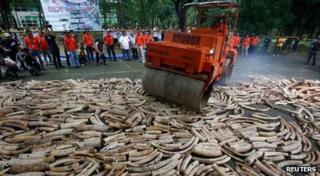 Much of the demand for ivory is coming from Asia, where it is used to make specially designed ornaments and expensive gifts.

George Wittemyer, from Colorado State University and who worked on the report, said: "We are shredding the fabric of elephant society and exterminating populations across the continent."

Conservationists say urgent action is now needed to protect the elephant in Africa.

The illegal trade in elephant ivory