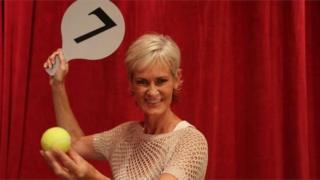 Judy Murray has confirmed she will be taking part in the new series of Strictly Come Dancing.

The tennis coach is the mother of former Wimbledon champion Andy Murray.

She said: "I'm a huge Strictly fan but a total armchair dancer.

"It's going to be a big challenge for me and for whoever has to dance with me."

She added: "I absolutely can't wait to get started."

Singer Frankie Bridge, from girl band The Saturdays, is the only other celebrity confirmed as taking part in the upcoming series, which starts in September on BBC One.