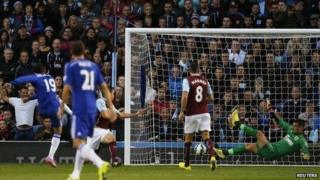 Reuters
Diego Costa scores for Chelsea, his first goal since a £32m move from Atletico Madrid

Diego Costa scored on his Chelsea debut as the title favourites came from behind to outclass newly-promoted Burnley at Turf Moor.

There was the threat of an upset as Burnley's Scott Arfield opened the scoring with a stunner from distance.

But Burnley's lead was short-lived as Costa levelled with a simple tap-in.

Andre Schurrle scored Chelsea's second after a cute Cesc Fabregas pass and Branislav Ivanovic struck from a corner to seal the win for the Blues.