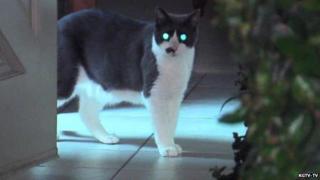 Police had to rescue a mother and daughter who were being held hostage in their home... by their cat.

The pair from San Diego in the United States called the emergency services after Cuppy the cat went into a rage and wouldn't let them leave.

Local resident Karen Yarger said the cat had been a family pet for years but is unpredictable.

Neighbours described Cuppy as "a ball of fury".