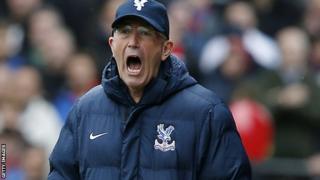 The former Stoke manager has been frustrated by the failure to land a number of his transfer targets during the summer.

Assistant manager Keith Millen will be in temporary charge for Saturday's trip to Arsenal.

The remainder of his coaching staff - including Gerry Francis and Dave Kemp - have been asked by Parish to stay on for the Arsenal game before leaving the club.

Pulis left Stoke last year after seven years at the Britannia Stadium, having guided the Potteries outfit to the Premier League and kept them there, extending his record of never being relegated.