Which book character would you put on stage? 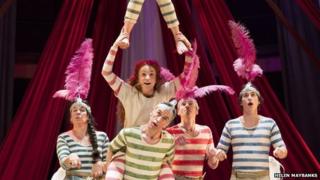 Jacqueline Wilson's Hetty Feather has been brought to life in a West End show in London.

The story about a Victorian orphan in search of her parents was written by the Tracy Beaker creator and first published back in 2009.

The book is also being turned into a new TV series for the CBBC channel.

Roald Dahl favourites Matilda and Charlie and the Chocolate Factory have both been turned into successful West End shows too.

Which book character would you put on stage?

I think Compton Valence by Matt Brown should a musical because it's a amazing book and the props could de amazing!

I would like to see the characters from David Walliams' Demon Dentist because it's a very funny horror story.

I think Lily Alone because its action as well as a fun filled adventure and enjoyable for all ages it will be a tremendous performance.

I think Frozen in Time by Ali Sparkes or my Sister's Keeper by Jodi Picoult should be made into plays because they are my favourite books and appeal to all ages.

I think Diary of a Wimpy kid because it is my favourite book and it is very popular. It will make a good show to go on stage.

I think Little Darlings should be a musical, because the story sounds real and even though it is sad sometimes, it has a happy ending.

I think Itch by Simon Mayo would make a great show because it's really exciting and could teach you some science while you watch it.

Ratburger by David Walliams because it tells you how stressful people's lives can be.

I think Queenie should be a performance on stage because it is a magnificent story that no one could ever forget.

I would put the Alex Rider series on the West End stage because it has already been made into a movie and it's really exciting.

I would like to see Diary Of A Wimpy Kid on stage because I have read all the books. I love the books!

I would put The Long Whale Song on stage because it will be popular and loads of people will go and watch it.

I think Jacqueline Wilson's Jacky Daydream should be made into a West End production. It would be interesting to see who would play who.

I would choose Gangsta Granny by David Walliams because it's funny but sad. There will be moments when you cry with laughter or cry with sadness. It will appeal to all ages as well.

I think Lily Alone by Jacqueline Wilson should be a musical because it is a good book and the props could be amazing!

I think Best Friends would be great on stage because it's a rollercoaster journey through friendship.