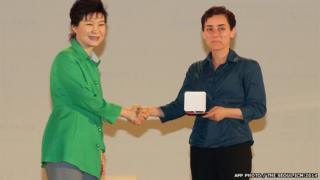 An Iranian mathematician working in America has become the first woman ever to win a top maths prize.

A bit like a Nobel Prize for maths, the Fields Medal is a huge honour and is only awarded once every four years.

Prof Maryam Mirzakhani was recognised for her work on complex geometry.

She said she hoped to "inspire lots more girls and young women, in this country and around the world, to believe in their own abilities and aim to be Fields Medallists of the future."

It's being seen as "long overdue" by some people that she's the first woman to have won this prize.

The first woman to win a Nobel Prize, in physics, was Marie Curie, in 1903 - over a century ago. She then won another one for chemistry in 1911. 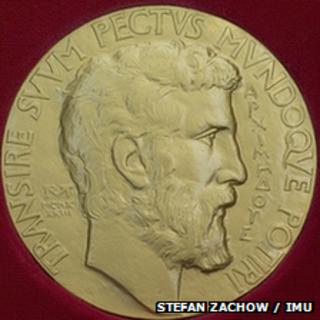 Stefan Zachow / IMU
The medal has Archimedes' face on it

The medal has Archimedes' face on it

Medals were presented to four winners in Seoul, South Korea, at the International Congress of Mathematicians.

Maths expert Prof Alison Etheridge, from the University of Oxford, said: "Women are doing so well now in mathematics that this is just icing on the cake.

"I think it could have quite an impact on a new generation," she told the BBC.