Rory McIlroy wins his fourth major in US 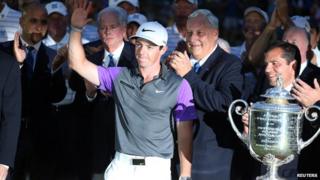 Northern Ireland's Rory McIlroy has won the fourth major of his career at the US PGA Championship at a rainy Valhalla.

World number one McIlroy, who's 25, saw his overnight one-shot lead wiped out before taking control to win by one shot.

Rory finished the championship 16 under par.

The win comes just a few weeks after he won his third major at Hoylake.

He's the third youngest player after Tiger Woods and Jack Nicklaus to win four of golf's biggest prizes and also the first man to win back-to-back majors since Padraig Harrington in 2008.