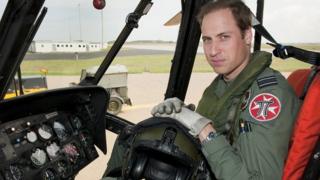 PA
Prince William will soon be taking to the skies

Prince William is to become an air ambulance pilot next year, it has been announced.

Kensington Palace have stated that the Duke of Cambridge will be joining the East Anglian Air Ambulance, and will be flying both day and night shifts.

William will still be undertaking his royal duties on behalf of the Queen, but his new role will now be his main job.

The Prince has said that he's "hugely excited and motivated" by the role.

He will be based at Cambridge Airport and fly missions in Cambridgeshire, Norfolk, Suffolk and Bedfordshire.

Although he will be paid a salary, William will donate it all to the charity.