Comments: What award would your pet win? 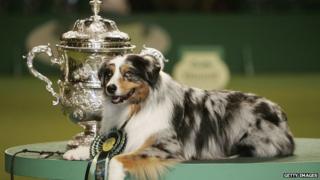 This week saw the Cats Protection's National Cat Awards, where fantastic felines from across the UK battled it out to get their paws on the title of National Cat of the Year.

The awards are now in their 7th year and recognise the cats that have performed outstanding acts of courage, loyalty or determination.

From hundreds of nominations, 17 finalists have been selected across five categories, including Hero Cat, Most Incredible Story and Most Caring Cat.

So with all of these incredible animals being recognised for the things they do for their owners, we'd like YOUR pets to have their moment too.

We want to know what award your pet would get if it could be recognised for anything!

What award would your pet get?

Tell us what they would win and why.

My pet guinea pig, Jaffa, would get 'Most Cheekiest'. He is always stealing food from his guinea pig brother, Pepper.

My house rabbit, Nugget, would win the "Most Genius Rabbit" as he has learned an ingenious way of opening our kitchen door!

My cat, Squeakie, would win the cleverest cat award as earlier today she climbed onto the table and ate my mum's breakfast...silly cat!

My rabbit Cloudy would get an award for having the softest ears.

I think my hamster, Sky, should get the award for the Daredevil Hamster of the Year because she climbs round across the top of her cage with nothing underneath her!

My cat Peppy should win an award because he likes me to give him piggybacks. It's really cute!

My dog is called Toby and he would win the scruffiest mutt because he digs up holes and rolls around in mud.

My dog would get the award for most tail wagging in a minute!

My dog would probably win the best escape artist, because my dad piles the garden with fences, but somehow, she still gets through to next door.

My cat would win The Cat who Sleeps the Most because he sleeps practically every minute of every day apart from when he eats and he even sleeps outside under bushes!

My cat Rosie would win cutest cat award because when I'm in bed she cuddles under my arm.

My dog should get a award for the oldest but most agile award! Because even though Tess (my dog) is old she is always running about and catching balls.

I have a cat with a cute nose which is half pink and half black. She would win the cutest cat in the world award.