Celtic out of Champions League 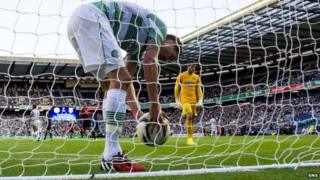 Celtic have been knocked out of the Champions League after losing their qualifying match.

Trailing 4-1 to Polish side Legia Warsaw after the first leg, they were beaten 2-0 at Murrayfield in Edinburgh.

It means they lost 6-1 on aggregate when both scores are added together.

The Scottish champions were booed off the pitch by their supporters after the defeat.

In the last two seasons, Celtic have earned over 33 million pounds in prize money from playing in the competition.