Io has one of Solar System's 'brightest volcanoes' 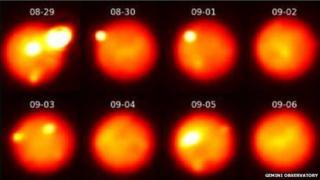 Now, an image released by the Gemini Observatory shows that it was one of the brightest volcanoes ever seen in our Solar System.

During the eruptions, fountains of lava flowed from long vents on the surface of the moon.

The fountains were over 10,000 times more powerful than those seen during the 2010 eruption of Eyjafjallajokull in Iceland.

Jupiter is a the Solar System's most massive planet, so it has a really strong gravitational force. 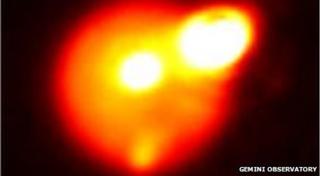 Jupiter's moon is much smaller and is pushed and pulled by the gravitational force of Jupiter and other moons nearby. All this pushing and pulling results in it becoming very hot.

Two eight-metre telescopes, one in Hawaii and one in Chile, were used by the Gemini Observatory to collect the data.

Space scientists are really interested in Jupiter's moons and US space agency Nasa has announced that it plans to send a probe to Europa, one of Jupiter's other moons.