A group of schoolboys has unearthed a rare 4,000-year-old ornament during a dig in Northumberland.

The children from Cumbria were taking part in an excavation at Kirkhaugh when they saw a glint of gold in the soil.

The object, which was found in a burial mound, is believed to be a decorated hair tress from about 2,300 BC.

One of the boys, 7 year-old Joseph, said when he saw the gold in the ground he started "dancing with joy".

The ornament, which is 33mm long and dates back to the Copper Age, was found alongside three flint arrowheads and a jet button. 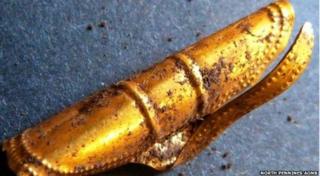 It is thought to have been worn by a metal worker who could have travelled to Britain from overseas in search of gold and copper.

The dig was arranged by the North Pennines Area of Outstanding Natural Beauty as part of an archaeology project.