Scientists get a glimpse of life below the waves

Scientists have got a glimpse of life deep below the waves, on the slopes of a volcano under the sea, known as a seamount.

An underwater robot was used to gather pictures from the Hebrides Terrace Seamount, off the coast of Scotland.

The seamount is higher than Ben Nevis, but its peak is 1,000m beneath the surface.

Prof J Murray Roberts, from Heriot-Watt University, and his team filmed more than 100 species on its slopes. 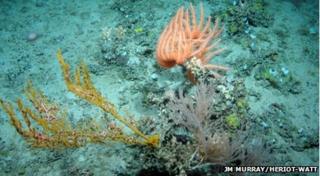 "These are vast structures in the ocean," Prof Roberts explained.

"They're exciting because they grow up through the ocean and have steep sloping sides. [When] the currents hit the sides of the seamount and they stir up nutrients, they become really productive areas."

Prof Roberts and his team watched from a ship-based laboratory while their rover explored the depths.

They identified more than 100 different species, from "really strange" single celled organisms called xenophyophores, which build structures by sticking grains of sand together, to unusual coral species and even an octopus. 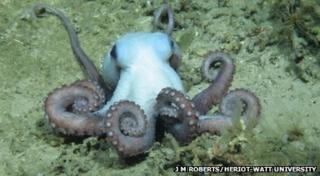 Prof Roberts said some of the coral species they saw were unexpected in North Atlantic waters.

"As well as the corals that form little reef patches, we saw things like black corals and bamboo corals," he said.

Some of these corals were providing protection for the egg cases of a very threatened deep sea skate - a relative of the sharks.

The findings have been published in the open access journal Scientific Reports.

'It's a once in a lifetime opportunity'