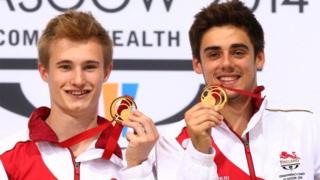 The pair led from second round to last and won easily from nearest challengers, Australians Grant Nel and Matthew Mitcham. It was the second gold of the games for Laugher. 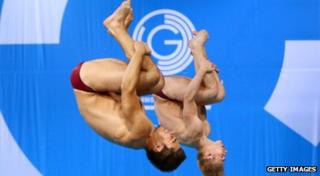 Getty Images
Perfectly in sync with each other

And an added bonus, Nick Robinson-Baker and Freddie Woodward claimed bronze too.

In gymnastics Scotland's Daniel Purvis delivered a stunning final routine to steal the gold from England's Nile Wilson in the men's parallel bars. Max Whitlock picked up yet another medal by taking the bronze. 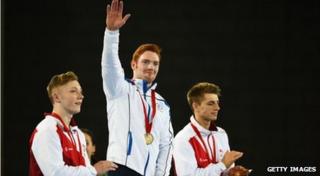 Winning her fourth gold of the Games, Claudia Fragapane dominated the women's floor event to become the first English woman to win four Commonwealth Games golds in a single Games for 84 years. 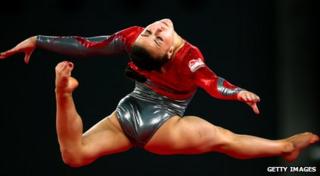 Nile Wilson put the disappointment of losing out on gold in the parallel bars earlier to secure the gold in the men's horizontal bars final. The 18-year-old won just ahead of England team-mate Kristian Thomas. 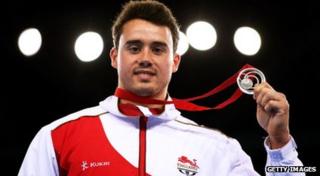 Kristian Thomas won a silver in the men's vault, being beaten to the gold by Canada's Scott Morgan, who adds the medal to his rings title and silver medal on the floor