He was 5.92 seconds down on Australia's Rohan Dennis after the middle section of the 38.4km course but came back to win. 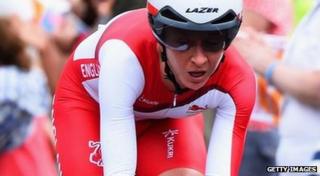 On Tuesday, Pooley announced that Glasgow 2014 would be the last major cycling competition of her career before she concentrated on triathlon and marathon running.

New Zealand's Linda Villumsen took the gold to deny Emma the victory, but she has one more chance to win Commonwealth gold when she takes part in the team road race on Sunday.