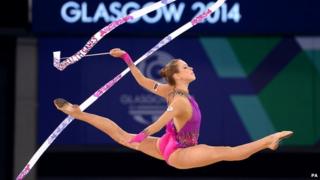 The 23-year-old won the individual ribbon final to add to three silvers secured earlier in the morning session.

Jones came second in the individual hoop final and in the clubs event.

Wales' gymnasts have won eight of their country's 11 medals so far in Glasgow.