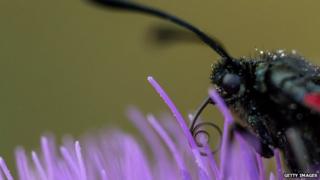 Humans could be to blame for a big drop in the number of insects on the planet, a new study has found.

In the last 35 years the number of humans on Earth has doubled, but the number of invertebrate animals like beetles, butterflies and spiders has dropped by almost half.

The drop is mainly down to loss of habitat because of human activity, and changes in climate, researchers say.

UK butterflies, bees and beetles have dropped by up to 60%, the study says.

A drop in the number of insects could cause big problems because insects pollinate food crops, and are themselves a food source for other animals.

Dr Rodolfo Dirzo who led the study, said the loss of insects produces "increasingly obvious consequences to the planet and to human wellbeing".

The study was published in the journal Science.