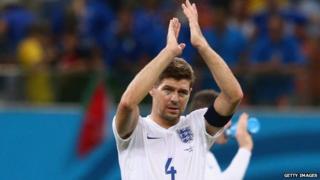 The Liverpool midfielder, played for England 114 times and scored 21 goals.

He played at three World Cups including the most recent in Brazil, as well as three European Championships.

He told FATV: "I have enjoyed every minute of representing my country and it is a sad day for me knowing that I won't pull on the England shirt again."

"This has been a very difficult decision, one of the toughest I've had to make in my career," he continued.

"I have agonised over this since coming back from Brazil and have spoken to family, friends and people close to me in the game before coming to this point."

He'll continue to work with the Football Association as an ambassador.

Players with most England caps

England manager Roy Hodgson said: "He is not only a player to bring crowds to their feet with moments of brilliance; he was a tremendous captain and an exceptional role model for everyone who was fortunate to come into contact with him."

FA Chairman Greg Dyke said: "It is sad news but also gives us the opportunity to celebrate a wonderful career; Steven gave everything for England and he will be missed."

Gerrard and Suarez on player of the year shortlist