Katarina Johnson-Thompson out of Glasgow 2014 with foot injury 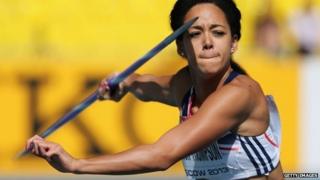 England's Katarina Johnson-Thompson is out of the 2014 Commonwealth Games in Glasgow because of a foot injury.

The 21-year-old from Liverpool was advised by doctors to pull out, after a "stress reaction" in her foot.

Katarina posted the highest heptathlon score of the year with a personal-best 6,682 points last month.

She said: "The Commonwealths was a key target for me this year. I was feeling so good in my preparation up until this week so this is a real blow."

Queen's baton arrives in Glasgow ahead of games