There has been a lot of fighting in Ukraine recently, and on Thursday 17 July a plane crashed in the east of the country near the city of Donetsk.

It's thought the plane was shot down - but so far nobody has admitted responsibility. It's difficult to investigate what really happened because of the fighting there.

It's incredibly rare for something like this to happen, but as a precaution airlines have been told not to fly over eastern parts of Ukraine. 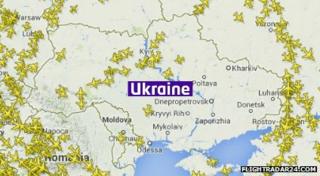 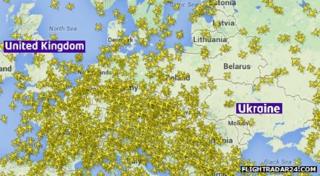 flightradar24.com
This map shows how many planes are above us at a time

A lot of airlines have decided not to fly over the country at all.

David Learmount, a safety expert from Flight Global magazine, told Newsround: "Flying is an incredibly safe way to travel. Safer than things we do every day, like travelling to school."

He said: "More than a billion journeys are made by plane every year, which just shows you how rarely serious incidents happen."

How safe is flying?

"It's easy to look at a story like this and be worried - but flying is still one of the safest ways you can travel.

"There are around 50,000 aircraft whizzing around above our heads every day and things like this almost never happen.

"If you want to stay safe, the best advice I can give you is to watch out when you are crossing the road or riding your bike. Those things are far more dangerous than flying!"