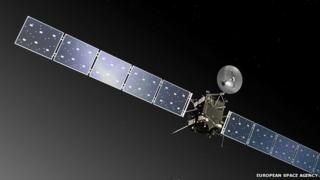 A plan to land on a icy comet in space will be more difficult than scientists previously thought.

The European Space Agency have released a video of the comet, nicknamed the space 'rubber duck' because of its shape.

Scientists didn't realise the surface of the icy object would be so uneven.

A probe called Rosetta will move closer to the comet in the next couple of weeks looking for a good place for a small robot to land later in the year.