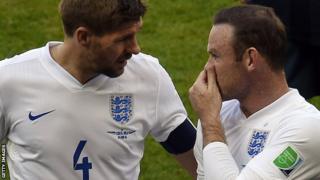 England have fallen to 20th in the latest FIFA world rankings, their lowest position since May 1996.

The drop of 10 places following a poor World Cup means they are behind Bosnia-Hercegovina, Costa Rica and the USA.

World Cup champions Germany are the number one team in the world for the first time in two decades.

Scotland remain at 27th and Wales have dropped three places to 44th, while Northern Ireland are up one to 89th and Republic of Ireland stay 70th.

England were third in August 2012 but World Cup defeats by Italy and Uruguay and a draw against Costa Rica have seen their standing in world football suffer.

Not since before the European Championships in 1996, when the team had dropped to 24th in the rankings, have England been so low.