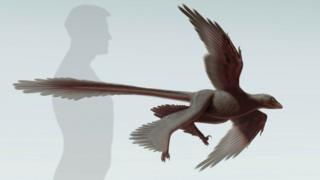 NHM
Here's how its size compares to an adult person

Scientists have found the fossil of a four-winged feathered dinosaur in China.

This unusual plumage helped the creature to slow down during flight and land safely, say researchers.

At 132cm long, weighing over 4 kilograms, it is the biggest dinosaur of its type discovered.

And it's bigger than the largest flying birds around today, such as the albatross.

The well-preserved, complete skeleton has a long tail with 30cm feathers. 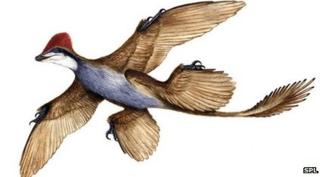 Four-winged dinosaurs, such as this, are known as microraptorines.