Huge bird is largest ever to have flown, say scientists 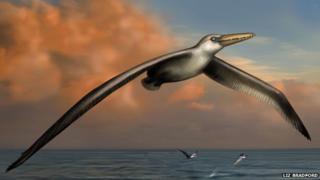 Scientists in America say they've discovered the fossilised remains of largest bird ever to have flown.

The vast creature would have looked like an enormous seagull.

But it would have been about FIVE times the size of the average gull: its wingspan (from one wing tip to the other) was between six and 7.4 metres.

The 25-million-year-old fossil was found 30 years ago in the US state of South Carolina, but it's only now been identified as a new species.

Scientists have called the new giant Pelagornis sandersi. They believe it would have been twice the size of the wandering albatross, the largest living bird.

Like the albatross, it was a seabird, spending most of its time swooping above the ocean, preying on fish and squid. 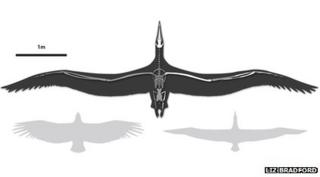 The researchers think this huge bird is bigger than the previous recorder-holder, Argentavis magnificens - a condor-like bird from South America with an estimated wingspan of 5.7-6.1m (19-20ft) that lived about six million years ago.

Daniel Ksepka, curator of science at the Bruce Museum in Connecticut, says that the fossilized bones are so delicate that it's amazing they've been so well preserved, for so long.

Even though it was so big, the researchers say it would have flown very gracefully.

Its long, slender wings and light, hollow bones would have made it a powerful glider, using air currents to soar above the ocean rather than flapping its wings. 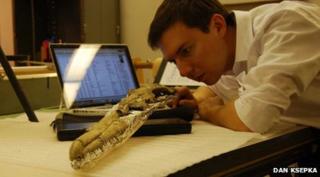 "It would have been fast and very efficient," said Dr Ksepka.

"It could likely glide at speeds over 10m per second - faster than the human world record for the 100m dash."

Not so good on solid ground

On land, though, the seabird was probably far less graceful.

Huge birds like this were once common, but they vanished about three million years ago.

Scientists do not yet understand why these giants of the skies died out.

"The long wings would have been cumbersome and it would have probably spent as little time as possible walking around," Dr Ksepka explained.

Taking off would also have looked pretty cumbersome: computer models show the bird might have had to waddle downhill and hope to catch a gust of air.

The find is published in the Proceedings of the National Academy of Sciences.