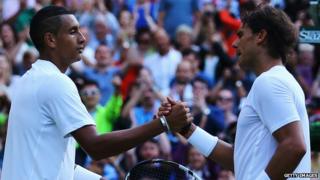 Australian teenager Nick Kyrgios caused a sensational upset as he beat world number one Rafael Nadal to reach the quarter-finals at Wimbledon.

Nadal has failed to make the last eight at Wimbledon since 2011.

What is a wild card?

Wimbledon has eight wild cards: these are players who are given a chance to play at the tournament even though their world rankings are low.

"I was in a bit of a zone out there and didn't really notice the crowd," Kyrgios told BBC Sport. "I was struggling a little on return but I worked my way into it and I served really well throughout, so am very happy.

"You have to believe that you can win the match from the start and I definitely did. I am playing really well on grass."