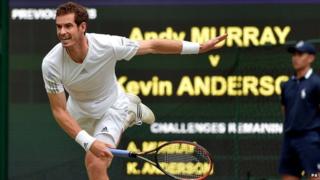 Defending champion Andy Murray is through to the Wimbledon quarter-finals for the seventh year in a row after a straight sets victory over Kevin Anderson.

Anderson had been seen as a big threat with his powerful serve producing dozens of Aces in the first week.

Andy will now play Bulgaria's Grigor Dimitrov in the next round.

"When it was outdoors I played very well and was in a good position, but when we came indoors he was striking the ball better and serving better and I was dropping shorter," Murray told BBC Sport.

"That meant there was a lot more running at the end because he was playing very well."

The Scot remains on course to defend his Wimbledon title and so match Fred Perry, the last Briton to do so in 1936.