Heather Watson knocked out of Wimbledon by Angelique Kerber 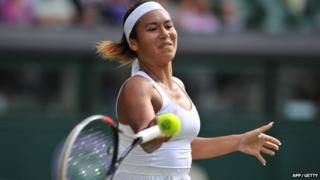 Britain's Heather Watson has been knocked out of Wimbledon in the second round, by Germany's Angelique Kerber.

It was a tough ask for Heather to beat ninth seed Kerber, who's ranked 53 places above the British number one.

Kerber was simply too strong in the first set and even though Watson fought back to win the second set, Kerber took the third and final set winning the match in three sets 2-6, 7-6, 1-6.

Andy Murray blasts into third round