Fifa, the organisation that runs world football, has opened an investigation after Luis Suarez appeared to bite another player during a World Cup game.

The referee took no action at the time, but Fifa could give him a ban of up to 24 matches or two years.

Suarez and Uruguayan FA have until 5pm Brazil time on Wednesday to respond to the charges against him.

Chiellini claimed Suarez bit him on the left shoulder, but Suarez said the defender "bumped" into him.

The referee took no action during the game but Fifa have now said they're investigating what happened. 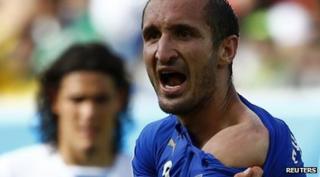 Reuters
Giorgio Chiellini shows the alleged bite on his shoulder

The Liverpool striker was given a 10-match ban by the FA last year for biting Chelsea's Branislav Ivanovic.