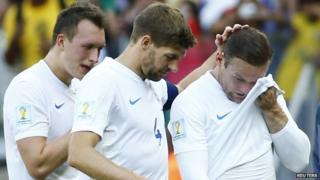 England's football team are flying home from Brazil after ending the World Cup with a tame 0-0 draw against Costa Rica.

They went into Tuesday's game knowing they'd already been knocked out, getting knocked out after losing their first two group matches.

The draw means they finish bottom of Group D with just one point.

It's the first time since 1958 that England haven't made it past the group stage at a World Cup.

Costa Rica and Uruguay are through to the knockouts, while four-time champions Italy are also going home after losing 1-0 to Uruguay.