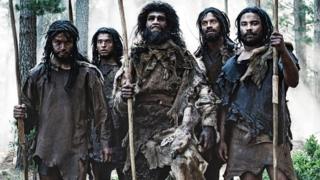 Researchers examined ancient specimens of poo, from people who lived in part of southern Spain 50,000 years ago.

They found that while all the samples contained traces of meat, but two showed signs of plant matter, suggesting they ate their veg too.

Who were the Neanderthals?

The study's authors say the results will help us understand how humans have come to dominate the planet.

By doing detailed tests on the ancient poo, the team found that while meat was the main part of Neanderthals' diet, they may have also consumed a fairly regular portion of plants, such as tubers, berries, and nuts.

"We believe Neanderthals probably ate what was available in different situations, seasons, and climates," says Ainara Sistiaga, from the University of La Laguna in Spain, who worked on the study with colleagues from MIT in America.

Traces in the teeth

This latest finding comes after the recent discovery of plant microfossils trapped in Neanderthal teeth - which some thought might suggest fruit and veg in their diet.

But Ainara's more cautious about the teeth evidence: "Sometimes in prehistoric societies, they used their teeth as tools, biting plants, among other things.

SPL
Neanderthals were close evolutionary cousins of our own species, Homo sapiens

"We can't assume they were actually eating the plants based on finding microfossils in their teeth."

The traces this study found in the poo, suggest the first direct evidence for a more varied diet for our cavemen ancestors.

The results of the study were published in the journal PLoS One.