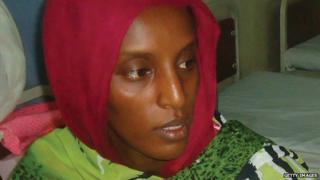 A woman in Sudan, released on Monday from her death sentence for being a Christian, has been arrested again.

She is accused of faking official documents to allow her to leave the country, her lawyer said.

Meriam Yahia Ibrahim Ishag was originally arrested because does not follow her father's Muslim faith, so she was seen by some people in Sudan to have abandoned Islam.

She was raised as a Christian so she refused to change her religion.

Her husband is Christian too, as well as an American citizen. It's thought she was planning to travel to the US after being freed.

Meriam's sentence caused widespread protests around the world and eventually the Sudanese government decided to change its decision.

She was set free on Monday but then arrested again on Tuesday. Sudanese officials said she was trying to leave the country with papers from South Sudan - a different country entirely.

American officials say they are working with Sudan's government to try to get her freed once again.