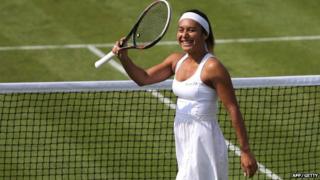 Britain's Heather Watson has won her first round match at Wimbledon against Croatian Ajla Tomljanovic.

It was an easy match for Heather who won in straight sets 6-3 6-2 to go through to the second round.

Watson will now ninth seed Angelique Kerber of Germany for the chance to get to the third round, as she did in 2012.

Andy Murray through to second round of Wimbledon

Hadrian's wall gets a colourful makeover!