Andy Murray through to second round of Wimbledon 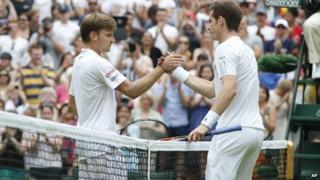 Andy Murray eased into the second round of Wimbledon after defeating Belgium's David Goffin in straight sets.

The Wimbledon champion opened play on centre court to a standing ovation from the crowd.

It was a straightforward win for Murray, who's the third seed, taking the first set in under 30 minutes.

Murray said he was pleased with how it went: "I thought it was a very high standard match."

As the current champion walked onto Centre Court he was greeted by a long standing ovation by the crowd.

He went on: "I was nervous this morning and I was nervous last night, but once you sit down on the chair it's time to get on with this year." 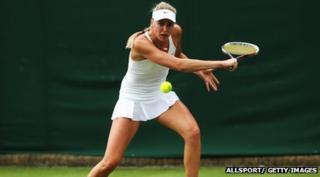 Another British player celebrating was 24-year-old Naomi Broady, who overcame a tough three set match against Hungary's Timea Babos, to win her first Grand Slam match and reach the second round.

It wasn't such good news for other Brits in action on the first day though: Johanna Konta, James Ward, Dan Cox, Dan Evans and Kyle Edmund all lost in the first round.

Murray will play Slovenian Blaz Rola in the second round on Wednesday, while Naomi Broady will face Caroline Wozniacki or Shahar Peer.