A hot-air balloon was forced to land in the middle of a street in Northampton after the wind suddenly dropped.

When pilot Matt Rate noticed the lack of wind, he called his crew on the ground to let them know he was planning to come down.

He originally planned to land in a nearby park but was at risk of hitting a tree, so decided to land on the street. 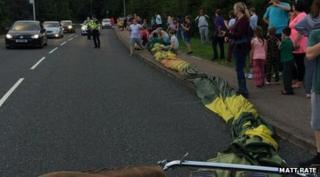 Matt Rate
Residents come out to look at the balloon

As he came down towards the ground, his team sectioned off an area of the road.

Both the pilot and his two passengers were unharmed. He said the landing was the safest option at the time and if he had left it any later he could have come down over the town centre.