Will you watch England in their final World Cup match? 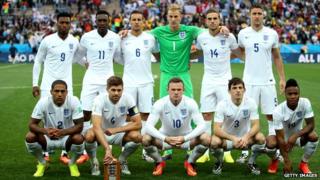 England play their final World Cup match against Costa Rica on Tuesday but will you be watching the game now they're out of the competition?

After Italy lost 1-0 to Costa Rica, England were knocked out of the tournament and even if they win on Thursday, they won't go through because they don't have enough points.

We want to know if you will watch England's final match in the World Cup?

Maybe you think it's important for the team to win or perhaps you don't think there's any point watching because they can't qualify.

Thanks to all who got in touch - this chat page is now closed but you can see a selection of your comments below.

Yes I will be watching, gutted we are out but we have to support them all the way to the Euros!

Off course I'll watch it! Just because they won't go through doesn't mean they don't need a heap of support!

I am going to watch it but because I don't like football I will probably get bored, plus there is really no point in them playing but I still support them 100%.

I never watch it because we're never going to win, it's such a waste of money that could be spent on way better things.

I might watch some of it but I think I'll get distracted!

Yeah! I'm going to watch it, I hope that they beat Costa Rica. GO ENGLAND!

I'm definitely watching England. There's still a chance that we will win the last game and James Milner will show why he will be next captain. He works so hard.

I am still going to watch the match because it is great fun, but I am still sad that they are out.

My Dad always watches all the football matches no matter what teams are playing, so we will probably be watching it tonight!

I don't think I will watch it as it will be utterly boring. England have been playing badly this World Cup and Costa Rica have been playing very well with Joel Campbell showing how much potential the Arsenal young man has.

I won't watch the England game because I'm a Germany fan. Come on Germany!

Yes, If you support a team you should support them through good and bad!

I will be watching the football because I would like to watch them for their last time in Brazil.

I am going to watch Italy because there is no point to watch a team if they are out of the World Cup.

I am going to watch England because I love England playing.

I won't be watching England because I will be too tired.

I will probably watch it, but even if they do win, they haven't qualified!

I'm not going to watch it because there's no point, they cant win the tournament because they're out and it gives less excitement!

I am watching the match after my sports day in my school. We are having a fair first and then the big screen will come on at five and we will all come in to watch.

No I won't but I will be finding out the scores on Newsround tomorrow.

I won't be watching the England game as I think they are pretty much out of the running.

I will always watch England, they may not have done well but I never lose faith that they will come back next time.

I am going to watch it even though they can't qualify. At least they tried.

I am proud to be English so I am 100% watching my team play.

I am not going to watch because I hate football and they won't even get through. Sorry to the people who like football but I don't I love skiing.

I will definitely be watching England tonight because that is where I come from and I believe in them to finish 3rd in our group!

Yes I may as well, they may lose, but I don't care anymore really. In our family we did a draw, and my best team is Argentina, so go Argentina!

I still like England so I'm still going to watch it.

I will be watching the game still as it is on earlier. But sadly they're out of the tournament.

I will definitely watch England tonight, even though they are still out of the World Cup. It's their last game and if people don't give support then they're not going to win. Spain won their last game so England will too.

Yeah! I'd invited all my mates round before we knew England were out so we might just muck about a bit now they're out.

I'm not going to watch it because they can't qualify.