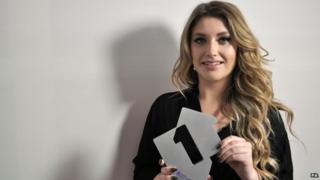 The song by the 18-year-old was co-written by One Republic frontman Ryan Tedder and is the fourth fastest selling single of the year so far.

The X Factor star beat 5 Seconds Of Summer to the top spot by just 3,000 copies.

The Official Chart Company said it was one of the closest chart battles of 2014 so far.