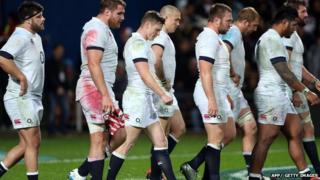 New Zealand completed a 3-0 series whitewash over England with a 36-13 win in the third Test in Hamilton.

The All Blacks tore England's defence apart, having beaten England in their two previous matches.

The result means the New Zealand side equal the record of 17 consecutive Test victories for a top-tier nation.