Which team will you support now? 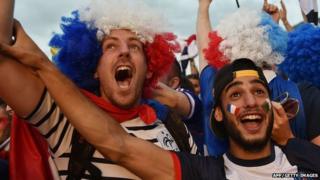 For everyone who was following England in the World Cup the journey is over.

The team are out of this year's tournament and are coming home after their final match against Costa Rica on Tuesday.

If you were supporting England we want to know if you'll be cheering on another team in the rest of the World Cup and why?

Maybe you're a Messi fanatic and will root for Argentina, or will the fantastic France get your vote?

Tell us where your loyalties will lie.

This chat page has now closed but you can check out a selection of your comments below. Thanks so much to all who got in touch!

I am going to support Australia because my cousins are from there.

Ivory Coast because of that great goal Gervinho scored and my two favourite brothers Kolo and Yaya Toure.

I will support Portugal because they need loads of support to win their next match as they lost 4-0 to Germany.

I am supporting Uruguay because I love all the players, especially Luis Suarez.

I want Argentina to win because they have Messi, Aguero and Di Maria also I love their style of play.

I will support Brazil now just because I love watching them play football as well as showing astonishing skills.

I am supporting Costa Rica because they are the underdogs in this World Cup now.

I will support The Netherlands because my family is from Amsterdam! Go Holland!

I'm supporting Brazil all the way because they are really good and it would be great to win at home.

Both my teams (England and Spain) have been knocked out sadly. So I will probably now support a Latin American country because I have lots of friends from there and they have very interesting countries. But I don't want Brazil to win because they have already won a number of times and they should give other countries a chance.

I am going to support Germany now because I live in Germany! (I come from England). But I guess it would be nice if Brazil won too!

I will be supporting Holland because I am a Man United fan and Van Gaal is our new manager. Also, Van Persie is one of my favourite players and he is Holland's best striker.

I'm supporting Colombia. Because they have world class players and they're very organized, so I'm confident they will go a long way. So come on Colombia!

I will support Costa Rica because they are a small country and people did not think they would do well.

I want Argentina or Belgium to win, because Argentina have a world class team that can take them to glory, and Belgium have a fantastic group of young players that are capable of so much.

I will be supporting Ecuador because my mum is Ecuadorian :)

I will support Italy. I have supported them since they won against England, Italy are epic! Italy are doing quite well; I never really supported England.

I think Germany because they are playing really well. And they beat Spain 5-1 which is a really good score. I think they're going to win the World Cup.

I'm rooting for Brazil because of their top quality players and I also have them in our family sweepstake!

I am going to support France because I am a quarter French and the rest of my family is too.

I will support Costa Rica because they are really good and it is my home country.

I'm going to support Croatia because at school we all got put with a team and I'm Croatia.

I will support Costa Rica! They have played amazing football and I can't believe they have done so well in such a difficult group. They are fantastic!

Germany because they have the best players in the tournament!

Brazil. I would have gone for Spain but Spain are out. The reason why I chose Brazil is because it's where the World Cup is and because they are really good. Go Brazil!

I will support the Netherlands as we have friends there.

I will be supporting Chile because they are doing well and no one would expect them to do well, especially in the hard group they are in.

I will support France because they have Benzema.

I'm going to be supporting either Argentina or Germany. I'm so gutted England are out of the World Cup.

I will support Holland because my cousins live there and I watched the 5-1 game and supported Holland.

England knocked out of the World Cup