How can England get through to the World Cup last 16? 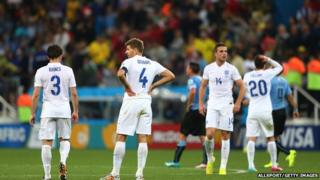 England may have lost against Uruguay but they still have a glimmer of hope of getting through to the knockout stages.

Roy Hodgson's men need to rely on the side that beat them in their first match: Italy.

For England to make it to the last sixteen, all of these things need to happen:

Even if this happens, all three teams, Uruguay, Costa Rica and England will be on three points. So who goes through will be decided on goal difference: England's goal difference would still need to be better than Uruguay and Costa Rica.

If Italy draw or lose, against either Costa Rica or Uruguay, Steven Gerrard and his team-mates are out of the tournament.

History's not on England's side either: no team has ever lost their first two games at a World Cup and got through to the knockout stages.

Our World Cup fact of the day!