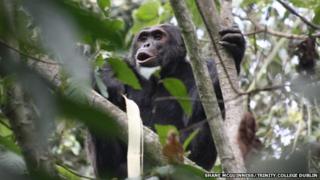 Gangs of thieving chimps are stealing crops from hundreds of thousands of people in Africa, says a new study.

Scientists from Trinity College Dublin say chimps aren't eating their natural food, instead stealing crops from fields near forests where they live.

It's thought the problem is having an impact on the diet of people there.

Some farmers have given up trying to stop them, but these crops are crucial food sources for many African people, so others are trying to fight back.

The problem is that staying up after dark to defend their crops puts farmers at risk of mosquitoes that come out at night.

These insects live in their fields and spread malaria, which can be a deadly disease if not treated.

Chimpanzees are also a protected species, so any action by the farmers has to bear in mind their conservation.

Finding a solution is difficult because they have to consider the interests of humans alongside the protection of these animals.

Scientists say solving the conflict would need to combine the farmers' local knowledge along with scientific know-how.

Combining the two could help make sure the animals' natural habitat is protected, but also that farmers and their families don't lose out on an important source of food.