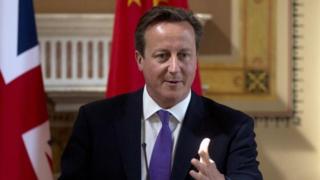 The National Security Council, chaired by the prime minister, will discuss the moves made by ISIS fighters, and how the conflict could affect the UK.

The violence in the middle eastern country of Iraq is getting worse as fighting moves closer to the capital city Baghdad.

The BBC's Middle East correspondent Jim Muir said there was "a great threat to Baghdad and people there are very nervous indeed".

In the past week fighters for the Sunni militant group Isis, who oppose Iraq's Shia government, have taken over a number of Iraqi towns and cities.

Although most Iraqis are Muslim, they belong to different branches of the faith: Shia and Sunni, who disagree about how the country should be run.

The government in Iraq is Shia while the Isis militants are Sunni.

While most people in Iraq are Shia, about 90% of the world's Muslims are Sunni.

Hundreds of thousands of Iraqis have left their homes to flee the fighting.

Officials in Iraq now say they're worried the country is in danger of falling apart.

The governments of America and the UK are trying to work out what can be done to stop the situation getting worse.

America's government says it's sending up to 275 military personnel to Iraq to provide security for the US embassy in the capital, Baghdad.

What is an embassy?

An embassy is a building and staff that represents its country, in a foreign country.

They also help out citizens of their country if they run into trouble abroad.

They'll help move staff away from the embassy for the time being, to protect them from the increasing violence.

This isn't the first time that Iraq has been in the global headlines.

In 2003 the UK government decided to send British troops to the country as part of a US-led invasion.

But what was meant to be a quick operation turned into a war lasting years, which cost thousands of lives.