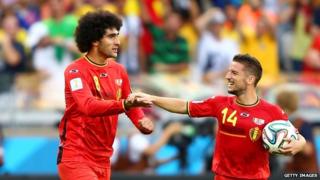 Check out the highlights from Tuesday's World Cup clashes from Brazil, as Belgium and Algeria went head-to-head in Group H.

Group A's leaders and host team Brazil played their second group match against Mexico and Later in the day Russia took on South Korea in the group G's other match.

Dries Mertens strikes late as Belgium come from a goal down to beat Algeria 2-1 in their 2014 World Cup Group H clash in Belo Horizonte.

Sofiane Feghouli gave Algeria a shock first-half lead from the penalty spot after he was fouled by Jan Vertonghen, but Belgium came back strongly after the break with a stunning header from substitute Marouane Fellaini and Mertens' strike ten minutes from time.

Belgium's winning start will come as a relief after they had struggled to break down stubborn Algerian resistance to start with.

Brazil are held to a goalless draw by Mexico in their 2014 World Cup match in Fortaleza, after an inspired performance by Mexico goalkeeper Guillermo Ochoa.

The result leaves both sides level on four points in Group A with one game to play.

Russia and South Korea share the points after a 1-1 draw in their opening 2014 World Cup match in Cuiaba.

After a quiet first half, Russian goalkeeper Igor Akinfeev let Lee Keun-ho's shot to slip through his hands and into the net before substitute Aleksandr Kerzhakov hauled Russia level.