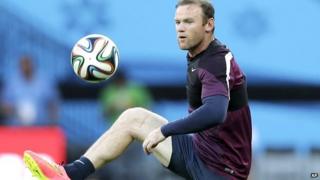 England's footballers play their first match in the World Cup tonight, against Italy.

The game takes place in the Brazilian city of Manaus where the temperature will be around 32C.

Or do you predict Italy will take victory and give England a bad start at the World Cup? Do you agree with Ronaldo the Newsround parrot?

Thanks for your comments. This page is now closed.

England will beat Italy because we have an amazing squad. GO ENGLAND.

I think that England will win 3-1 because they have really good players and I am sure Steven Gerrard will shoot a goal!

I will really want England to win but I doubt they will. But I'm cheering on my country! Go England!

I think Italy because they're better.

I think the score will be 3-2 to England.

Personally I am very patriotic but previously Italy has won the World Cup four times. So if England want to win, they need to play hard.

I think England will win because they have great young players and great old players and they have lots of pace so the Italians won't catch them.

Of course they will! They just have to believe in themselves. GO ENGLAND!

I think Italy will win 3-1 or something like that.

I think England is in with a chance of winning because lately Italy hasn't been playing its best.

I think it will be 4 -3 to England because they're a great team.

I think England is going to win because the team has got the best players.