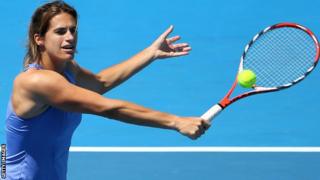 Mauresmo, 34, is currently France's Fed Cup captain and will first work with Murray for the grass court season.

The Scot will start the defence of his Queen's Club title next week before attempting to defend his Wimbledon crown.

"I'm excited by the possibilities of the new partnership and Amelie is someone I have always looked up to and admired," Murray said.

Murray has been without a coach since Ivan Lendl left in March, after two years together.

Mauresmo's appointment comes after the French Open in which she watched Murray win the first-round over Andrey Golubev.

Murray, who was coached by his mother Judy earlier in his career, went on to reach the semi-finals of the French Open where he lost to Rafael Nadal.

Mauresmo is a former Wimbledon and Australian Open champion.

'Excited to work with Andy'

She coached Frenchman Michael Llodra during the 2010 grass court season, has also worked with Victoria Azarenka and coached Marion Bartoli to her Wimbledon victory in 2013.

"I'm really excited to be able to work with Andy," said Mauresmo.

"I'm looking forward to getting down to work and helping him win more Grand Slams."