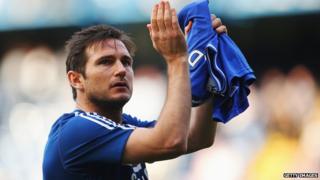 Chelsea midfield legend Frank Lampard will leave Stamford Bridge next season after playing at the club for 13 years.

He joined Chelsea from West Ham in 2001 and went on to play a massive 648 games.

The England star went on to break Chelsea's all time scoring record, smashing in 211 goals, breaking the previous record of 202.

Lampard has over 100 caps for England, scoring 29 goals and is sure to feature in this year's World Cup in Brazil.

"This club has become part of my life," said Lampard, who could retire, but has had offers from 16 other clubs.

Reacting to the news, Chelsea keeper Petr Cech tweeted: "It has been a privilege to have played with a true Chelsea legend and one of the most influential Premier League players ever."

He will be the second big name to leave Chelsea this summer, with Ashley Cole out of contract and looking for a new challenge.

Frank Lampard wants more boys to get into reading